It’s nothing personal. I still love you and I always will. (how? let me count the ways! without rhyming!) Your skyline. Your cumulus clouds. Your summer that lasts from early March until November. Your ridiculous spaghetti webs of highways. The fact you can drive 45 minutes away (at 60mph) from downtown and still be within city limits. You know what? I don’t even care your traffic runs from 7am to 7pm – driving around at 3am is where it’s at. Down Allen Parkway. Or through Montrose. Or in The Heights. Also your Rice University rocks for bajillions of reasons but ultimately: 2 pubs and a 24 hour library? BAM. Your exhaustive list of restaurants that are open awesomely late. Your young yet impressive music festival and your burgeoning concert scene.Your obscenely cheap housing market and remarkable standard of living. Your resistance to the plague of unemployment. Did I mention the weather? Because yea, the weather fucking rocks. Also you pretty much house all of my extended family and friends, so that’s a plus.
Despite all of this, it’s time for me to move on and go be my own person in different city for awhile. But seriously, no hard feelings. I will defend your clogged highways, dense humidity, and blood-boiling summers til the very end. ‘Cause it’s worth it.

Lastly, anyone who’s ever driven down Allen Parkway at night knows it’s imbued with mystical powers. Today’s playlist is brought to you by songs that I like to skip ahead to whenever I find myself on it: they are guaranteed to make you feel invincible if played in tune to the road’s epic curves (trust me, this is based on extensive mixed cd testing. Results may vary on other streets). 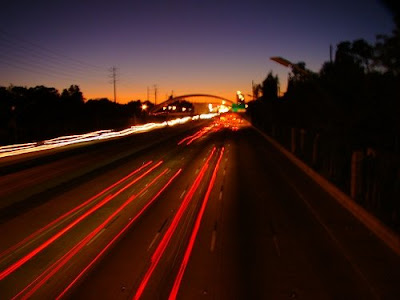 and with that, Grooveshark wins the funnest-way-to-make playlists award. *pours one out for Seeqpod* yea, I used the word funnest.
image cred: me! being a creeper on the mandell bridge over 59.