Because honestly, what’s more American than Baseball? (I still haven’t posted part I yet… but I’m getting there.)

The baseball game actually fit quite nicely into the day’s theme, especially since it ended up reminding me of this quote: 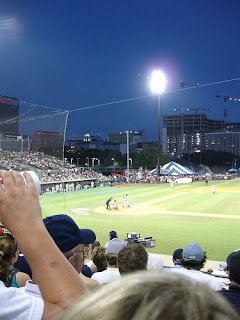 “And that, I think, was the handle — that sense of inevitable victory over the forces of Old and Evil. Not in any mean or military sense; we didn’t need that. Our energy would simply PREVAIL. There was no point in fighting — on our side or theirs. We had all the momentum; we were riding the crest of a high and beautiful wave…”

Yes, I did just take a beautifully profound statement about socio-political consciousness and apply it to a sport. Bear with me. Because if you’ve ever been to a Rice baseball game, maybe you understand the point I’m trying to get across. The very energy that binds an idealistic generation to notions of love, peace, and understanding also flows through the crowd in the stands, washing over the field and players. No matter how many errors we make or how many points we’re down– you never lose that feeling that winning is inevitable. I think it’s because somewhere along the line, we’re taught that it’s the thought that counts. Or maybe we’re just naively narcissistic. Whatever the case, we’re riding that wave.

Hunter S. Thompson would probably punch me in the face for using his words in that context (good thing I’m into pain, eh?). But I think he would have to agree, that under the circumstances, I’m allowed to say lots of stupid pseudo-deep shit because zomg RICE WON AND WE’RE GOING TO OMAHA!

But back to the original question-
What’s more American than baseball, you ask?
DESTROYING STUFF.
(What would Jesus blend? That is the question)

Last but not least, I have deemed this the official Rice Baseball song: