NOTE: this post is not a play-by-play of the three regional games.
a) I’m not that intense.
b) I don’t want to relive all of those Rice errors (d’oh!)
c) There is no c. I just have a compulsion to write out things in sets of three. 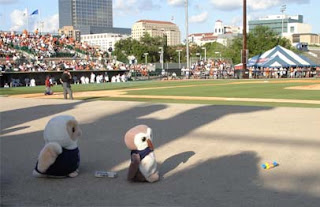 Friday’s game I got to sit in the first row behind the dugout, which means not only was I supersuper close, but I had the opportunity to see one of those “hardcore baseball fans” in their natural environment (Crikey!). You know, the kind of fan that actually pays money to sit right behind the dugout (I got a free ticket from a friend. Huzzah!) This particular baseball fan brought along a series of relics for the game which he set about arranging and rearranging depending on who was batting or how many people were on base. It was almost as entertaining as the game itself (which turned out to be a pretty meh win at 3-2.) My favorite part was in between pitches he would roll a piece of Double-Bubble chewing gum and flap the Beanie-Owl’s right wing twice…. I couldn’t look away. On a slightly less interesting note (yes, it’s possible) something else you get to see when directly behind the dugout is that the Sam Houston players get very creative with their high fives. More than 4 different kinds. There was some jumping, waving, and shoulder bumping involved. Not that they had anything to cheer about (ooooohhhhhburnnnnn). 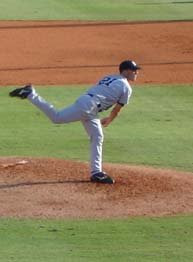 Saturday’s game was a little more interesting than Fridays (because for the first time in like ever we wore our grey uniforms and I’m all like omgomgz?! what happened to the cute white pants?! but we still like totally won so its okay i guess lololol) Probably because there was more scoring going on, translation: pwnage, biatches. I had really good seats again, this time out by third base. Thank you to Kyle for sleeping with the manager of the baseball team (no srsly guys, they were like roommates okay?! lololol see what I did there?! i had u fooled, rite?)
This game’s irrelevant observation: What is up with the serious lack of ass-slapping going on out there? I used to count a good healthy 5-6 after every score, but now the number has waned to a somewhere between 1-2. And that’s including the lower back contact. What’s the matter, guys? You think you can just replace the ass-slap with a back-pat and the high-five? No. That’s not how the phenomenon of physically-realized, socially-acceptable, male-sport-team-love works. My unofficial theory is that team comradery will suffer as a result, but I still need to graph the data from my logbooks. Conclusion pending.

SUNDAY: Rice vs. University of Texas

For the last game, I sat on the hill behind the outfield. Too many UT fans means my General Admission ticket is worth shit in the actual stadium. But I guess it was nice to sit with a big group of Rice kids. At the same time, it didn’t take long for the tradition of heckling the UT outfielders to piss me the fuck off (Aha! Indisputable proof that I am, in fact, female! Finally!). I guess I’m not big on anti-cheers, or at least not personal ones. Boys on the other hand, are just full of creative insults for the LF — scathing wit along the lines of “HEY NUMBER SIX—YOU SUCK!” followed by “IT’S BEEN THREE SECONDS SINCE I LAST YELLED AT YOU AND GUESS WHAT?—YOU STILL SUCK!” On the bright side, chatting with these overly aggressive factories of testosterone led to the invention of a new game. It’s Baseball fueled by Powerthirst. Baseball meets SPARTAAAA! Baseball, but MOARBETTER. Something like that. Basically, the new rules include:
-you can get people out by pegging them with the ball (which might call for the creation of a new position: the Sniper)
-You don’t have to run along the line between bases, you can run in circles all around the field to avoid potential tagging (Don’t forget, though, they can still hit you with the ball…)
-Fuck the Balk. Pitchers can throw wherever the hell they want.
(There was going to be the additional rule of “team must forfeit if pants not tight enough” but the boys vetoed that on… Plus, can you imagine what would happen if I wrote that out with a bullet point and made my list consist of more than three? That’s like dividing by zero! ) Anyway, the Rice-UT game turned out to be amazing in the Entertainment category more than the Actual Baseball Merit category. Even though it was jolly good fun to cheer for, we weren’t exactly playing our best. But I’m ignoring that for now. Instead, I’m going to pretend like those 6-glaring errors did not happen so that I can spend my energy rubbing this victory in all of my UT friend’s faces (Face + Baseball Dirt = Same color as their uniforms *giggle* Er, yeah, I’ve thought about this a little too much). If only I had UT friends that cared about baseball, this trash talk would be a bit more satisfying… 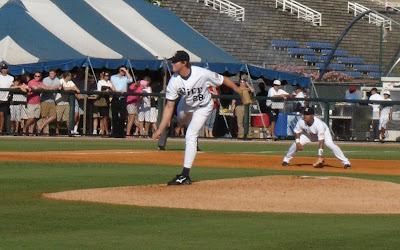 In conclusion, I less than three Rice Baseball.
It’s more than just a game; it’s a chance to watch old men play with beanie babies, a chance to count ass-slaps, and a chance to help the evolution of sports come full circle (first step, baseball pegs– next step, baseball gladiators!).
The great American pastime indeed.

Want MOAR cool baseball pictures?
Want actual baseball information?
Want to hear a really cool song?
Want me to write out a fourth question so that I break my streak of doing everything in threes?
Oh shi–