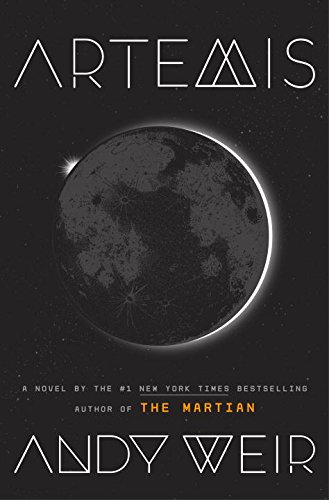 Artemis
by Andy Weir
To be Published: Nov 2017

Jasmine Bashara is a citizen of the Moon’s first city, Artemis. Raised by a hard-working welder, but independently employed as a freelance porter (aka smuggler), she finds herself at the epicenter of an elaborate conspiracy and must use her quick-thinking problem solving skills to stay alive.

Despite the inherent pressure in being the sophomore novel following an international bestseller, Artemis truly delivers as a gripping page-turner clearly cut from the same cloth, but more than able to stand up on its own. The novel is kinetic, engrossing, and an engineer’s wet dream (whether you get your kicks from reading about mechanical processes or from pedantically picking them apart). My only criticism is that the characters, endearing as they were, could be a bit immature. I curse like a sailor and love witty banter as much as the next guy, but at times the dialogue felt a little under-cooked, like the sparring of teenage affectations.

4.5 out of 5 stars: Weir continues to fill that Michael-Crichton-shaped hole in my heart with his take on thrilling lab-lit, i.e. going into excruciating amounts of detail when describing scientific and chemical processes. Honestly, Artemis takes up the torch even more than The Martian as it unravels a slightly wider spread of world-creation and plot: without giving too much away, we’re talking geo-political and economic maneuverings on top of all the knee-deep science jargon.

// I received this book free from NetGalley in exchange for an honest review.